Bleeding and Other Cat Paw Disorders 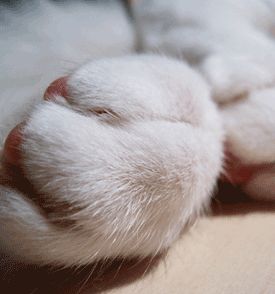 A cat’s natural curiosity and adventurous personality makes them an easy target for injuries. Whether you have an indoor cat or an outdoor cat; at some point you will have to deal with injured or bleeding paws. A feline’s willingness to climb and explore almost ensures an injury to their paws. Surprisingly, there are other causes of a bleeding paw.

It’s not always obvious when your cat has an injury; however, there are some signs you can look for. A cat with an injured paw may exhibit the following symptoms:

Pemphigus – This condition is a common disorder of the immune system that affects felines. It generally appears as bumps on a cat’s face and paw pads. Left untreated, the bumps will turn into pustules that eventually become scabs. When these bumps appear on paw pads, they will cause the pad to thicken and crack. Pemphigus is only detectable by performing a skin biopsy. Your veterinarian will send the skin biopsy to a lab where a qualified pathologist will examine it and make a diagnosis. Because pemphigus is an immune system disorder, it will be treated using a corticosteroid. Your veterinarian may also advise you to soak and wash your cat’s paws to help heal the sores and relieve the discomfort.

Insect Bites and Stings – One of the most common causes of bleeding paws in cats are outdoor pests, such as bees, mosquitos and spiders. A curious cat’s adventures make them prone to easy contamination and infection from bites and stings left unattended, as they romp through dirt and grass. Even indoor cats may be bitten by spiders or cut their paw on a cabinet or piece of furniture, then walk through their litter box, giving them the same chance for an infected paw. Generally, these injuries and infections can be treated by cleaning the paw and administering antibiotics.

Pillow Foot – This is a condition also known as plasma cell pododermatitis. Usually more than one paw is affected. Your cat’s paw pads may be pink or even somewhat purple, may appear severely swollen, and feel very soft to the touch, even squishy when pressed instead of slightly firm as in normal paw pads. This condition generally requires a biopsy or blood test to make a diagnosis. Until this condition becomes more severe, your cat may not even seem bothered or exhibit any symptoms. Plasma cell pododermatitis can be treated successfully with steroids and antibiotics.

Eosinophilic Granuloma – The symptoms of this condition are very similar to Pillow Foot, but generally only affect a single paw. Allergies to an airborne, environmental or food substance usually cause eosinophilic granuloma. A severe allergic reaction causes the cat’s immune system to attack the collagen in the foot, which manifests itself with swelling. Steroids and antibiotics are used to treat granuloma, and an anti-inflammatory is prescribed to help reduce the swelling. Your veterinarian will perform a test to identify the source of the allergy.